Jack Black is an American actor, comedian, voice artist, and musician. He has appeared in such films as High Fidelity, Shallow Hal, School of Rock, King Kong, Tenacious D in the Pick of Destiny, The Holiday, the Kung Fu Panda franchise, Tropic Thunder, Gulliver’s Travels, Bernie, Goosebumps, Jumanji: Welcome to the Jungle, and Jumanji: The Next Level. He was nominated for a Golden Globe Award for Best Actor for his role in School of Rock. He is also notable as the lead vocalist and guitarist for the comedy rock/hard rock band Tenacious D along with Kyle Gass. 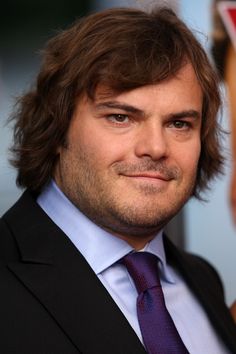 Born Thomas Jacob Black on August 28, 1969 in Santa Monica, California, his parents, Thomas Black and Judith Cohen, worked as engineers on the Hubble Space Telescope. He is of English, French, German, Irish, Scottish and Welsh descent on his father’s side, and of Jewish descent on his mother’s side. Black attended UCLA, and was a member of Tim Robbins’s acting troupe and it was through this collaboration that led to his 1992 film debut in Bob Roberts. He married Tanya Haden in March 2006 and he has two sons named Samuel and Thomas.

Jack Black Facts:
*Born on August 28, 1969 in Santa Monica, California, his parents split when he was 10 years old.
*His ancestry includes English, French, Jewish, German, Irish, Scottish and Welsh.
*He played Barry in the 2000 comedy-drama film High Fidelity
*He was given a star on Hollywood’s Walk of Fame in 2018.
*He launched a YouTube channel called Jablinski Games in December 2018.
*He is close friends with Dave Grohl.
*He had his gall bladder removed.
*He co-founded the band Tenacious D with Kyle Gass in 1994.
*He is good friends with Cesar Gonzalez, Tim Robbins and Will Smith.
*He dated comedian Kathy Griffin in 1992.
*He was engaged to actor/comedian/producer Laura Kightlinger.
*He and Mike White formed a production company called Black and White.
*He endorsed Barack Obama’s 2012 re-election campaign.
*He is an outspoken critic of Donald Trump.
*Visit his comedic band Tenacious D’s official website: www.tenaciousd.com
*Follow him on Twitter, YouTube, Facebook and Instagram.