Sreemukhi is an Indian actress and television host who appears in Telugu cinema. She is known for her roles in the films Prema Ishq Kaadhal, Ettuthikkum Madhayaanai, Nenu Sailaja, Savitri, and Gentleman. In 2015, Sreemukhi co-hosted the South Indian International Movie Awards (SIIMA) in Dubai. She has also hosted stand up comedy show Pataas, Super Mom, Comedy Nights, and Bhale Chance Le. In 2020, she began hosting Celebrity Kabbadi League. She is also the runner up of reality TV show Bigg Boss Telugu 3. 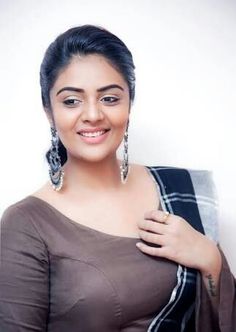 Sreemukhi Facts:
*Born on May 10, 1993 in Nizamabad, India, her parents are Ramkishan and Latha.
*She has a brother named Sushruth and a sister named Cherry.
*She started her career with hosting a TV show Adhurs.
*She made her debut as Raaji in the 2012 film Julai.
*She was runner up in GRAND FINALE of Bigg Boss Telugu Season 3.
*Her favourite Food are Dosa, Tangdi Kabab Biryani, and Poha.
*Follow her on Twitter, YouTube, Facebook and Instagram.