Jack Wilshere is an English professional footballer who came up through Arsenal’s youth academy and impressed from an early age. Wilshere plays as midfielder for Championship side AFC Bournemouth. From 2008 to 2018, Wilshere played for the Arsenal and has earned a number of accolades including the PFA Young Player of the Year award, selection to the 2010–11 PFA Team of the Year, and Arsenal’s Player of the Season award, as voted for by fans for his performances in his first full campaign for Arsenal during the 2010–11 season. An English international, Wilshere made his debut for the senior team against Hungary at the age of 18 years and 222 days, making him the 12th youngest debutant in England’s history. 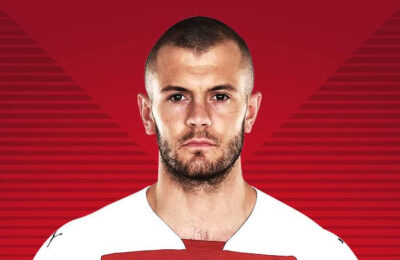 Born Jack Andrew Garry Wilshere on January 1, 1992 in Stevenage, United Kingdom, to parents Kerry and Andrew Wilshere, Jack captained The Priory School football team to County Cup and District Cup glory from Year 7 through to Year 10, and also added the Under 15s National Cup to his list in Year 8. He joined the Arsenal Academy at the age of 9. He became a member of the English national team in 2010. In 2018, Wilshere joined West Ham United F.C.

Jack Wilshere Facts:
*He was born on January 1, 1992 in Stevenage, United Kingdom.
*He was a boyhood fan of West Ham United, his idol being Paolo Di Canio.
*At age 9, Wilshere joined the Arsenal Academy from where he started his official pursue of a soccer career.
*He signed his first professional contract in January 2009.
*He is best friends with Benik Afobe.
*He is left-handed.
*Follow him on Twitter, Facebook and Instagram.