Jake Pitts is an American musician, songwriter and record producer. He is best known for being the lead guitarist of rock band Black Veil Brides. The band came in third place for MTV’s Favorite Breakthrough Band of 2011. Prior to joining Black Veil Brides, Pitts played lead guitar in the bands the Perfect Victim and 80 Proof Riot. He also formed the band Aelonia with his wife Inna Pitts. He is a certified recording engineer and went to Los Angeles Recording School in 2006. 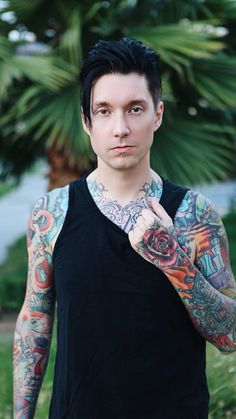 Born Jacob Mark Pitts on August 21, 1985 in Pocatello, Idaho, to parents Carolyn and Mark Pitts, he learned music and harmony theory from his mother, who was a classical pianist and composer. He married Inna Logvin Pitts on February 3, 2017

Jake Pitts Facts:
*He was born on August 21, 1985 in Pocatello, Idaho, USA.
*He received his first guitar when he was ten years old, and was inspired to play guitar by Metallica when he was thirteen years old.
*He started performing with the American rock band Black Veil Brides in 2010.
*He was honored with Revolver Magazine’s Best Guitarist Golden Gods Award in 2012.
*Van Halen, Scorpions, Paul Gilbert, Darkthrone, Cannibal Corpse, Slayer, Buckethead, Randy Rhoads, Pantera, Black Sabbath, Armored Saint, Dio, Manowar, Iced Earth, Avenged Sevenfold, Mötley Crüe, and Metallica are his musical influences.
*He opened a fitness company called Get Mean Fitness with his friend Matt Yani.
*He has dogs named Ernie and Trixy, as well as cats named Dobby and Gucci.
*He has tattoo sleeves on his both his arms.
*Follow him on Twitter, YouTube and Instagram.