Jami Gertz is an American film and television actress. She is best known for her roles as Judy Miller in the CBS sitcom Still Standing, and Debbie Weaver in the ABC sitcom The Neighbors. Gertz is also known for television roles as Muffy Tepperman on Square Pegs, Boots St. Claire on The Facts of Life, Dr. Nina Pomerantz on ER, Kimmy Bishop on Ally McBeal, and Marlo Klein on Entourage. She has also played prominent roles in the films Crossroads, Silence Like Glass, The Lost Boys, Sibling Rivalry, Jersey Girl, Listen to Me, Twister, Don’t Tell Her It’s Me, Less Than Zero, Quicksilver, and Keeping Up with the Steins. Born Jami Beth Gertz on October 28, 1965 in Chicago, Illinois, to an Ashkenazi Jewish family, she is the daughter of Sharyn and Walter Gertz. She has two brothers, Michael Gertz and Scott Gertz. Gertz was raised in Conservative Judaism. She graduated in 1983 from Maine East High School in Park Ridge, Illinois, and studied drama at New York University. She made her acting debut in the 1981 film Endless Love. She is married to businessperson Tony Ressler. They have three sons; Nicholas, Oliver and Theo. 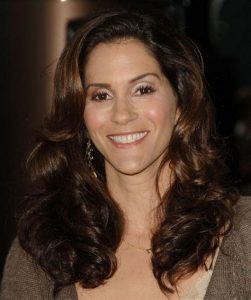 Jami Gertz Facts:
*She was born on October 28, 1965 in Chicago, Illinois, USA.
*Her father was a successful Chicago contractor.
*She was discovered by Norman Lear’s company in high school.
*She is a part-owner of the Atlanta Hawks of the National Basketball Association along with husband Tony Ressler (Antony P. Ressler).
*Currently, she resides in Los Angeles, California with her husband and three sons.