Woody Harrelson is an American actor and playwright who rose to prominence by portraying the role of bartender Woody Boyd on the NBC sitcom Cheers (1985–1993). Harrelson has starred in such films as Natural Born Killers, The People vs. Larry Flynt, The Thin Red Line, No Country for Old Men and The Hunger Games films. He played Detective Marty Hart in the first season of the HBO series True Detective. Harrelson is the recipient of various accolades, including a Primetime Emmy Award, and has been nominated for three Academy Awards and four Golden Globe Awards. Born Woodrow Tracy Harrelson on ‎July 23, 1961 in Midland, Texas, to parents Diane Lou (Oswald) and Charles Harrelson, he is the brother of Brett Harrelson and Jordan Harrelson. His ancestry includes English, German, Scottish, and distant Dutch and Welsh. Harrelson graduated from Hanover College in 1983 with a degree in theatre arts & English. He married Laura Loie in 2008, and the couple has three daughters, Deni Montana, Zoe Giordano and Makani Ravello. 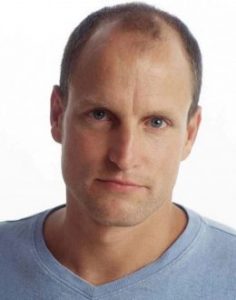 Woody Harrelson Facts:
*He was born on ‎July 23, 1961 in Midland, Texas, USA.
*He was educated at Lebanon High School and Hanover College.
*He worked as a wood-carver at Kings Island amusement park while attending high school.
*He made his debut as an uncredited extra in Harper Valley PTA (1978).
*People Magazine named him one of the top 50 Most Beautiful People in the World in 1990.
*He is good friends with the Red Hot Chili Peppers and Rob Moran.
*He is friends with Owen Wilson.
*He considers Howard Zinn to be a personal hero of his.
*He is a vegan.
*Follow him on Twitter, Facebook and Instagram.