Julie Benz is an American actress. She is best known for her portrayal of Darla on Buffy the Vampire Slayer and Angel, and for her role as Rita Bennett on the TV-cable series Dexter, for which she won the 2006 Satellite Award for Best Supporting Actress and the 2009 Saturn Award for Best Supporting Actress. Other notable television roles include Kathleen Topolsky in Roswell, Robin Gallagher in Desperate Housewives, Stephanie Powell in No Ordinary Family, Christina Holt in A Gifted Man, Amanda Rosewater in Defiance, Abby Dunn in Hawaii Five-0, and Holly Butler in Training Day. She has also appeared in the films Jawbreaker, The Brothers, Rambo, Saw V, Punisher: War Zone, and The Boondock Saints II: All Saints Day. 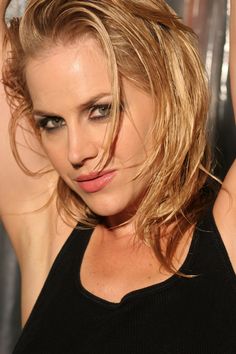 Born Julie Marie Benz on May 1, 1972 in Pittsburgh, Pennsylvania, her father, George Benz, Jr., is a surgeon, and her mother, Joanne Marie, was a figure skater. Benz started ice skating at age three, and competed in the 1988 U.S. Championships in junior ice dancing with her partner David Schilling and finished in thirteenth place. Her older sister and brother, Jennifer and Jeffrey, were in the 1987 U.S. Junior Champions in ice dancing and competed internationally. Benz graduated from Franklin Regional High School and obtained a degree in acting at New York University. She has been in a relationship with producer Rich Orosco since 2008. They got engaged in June 2011 and married on May 5, 2012. She was previously married to actor John Kassir.

Julie Benz Facts:
*She was born on May 1, 1972 in Pittsburgh, Pennsylvania, USA.
*She started ice skating at age three, and was once ranked #12 ice skater in the USA.
*At 14, she suffered a stress fracture in her right leg and had to take time off.
*In 2002, Maxim Magazine ranked her in the top 100 in their list of the sexiest women in the world.
*She is good friends with Eliza Dushku, Clare Kramer, and Jaime Murray.
*She has a dog named Bamboo.
*Follow her on Twitter, Facebook and Instagram.