Jan Oblak is a Slovenian professional footballer who plays as a goalkeeper for Spanish club Atlético Madrid and the Slovenia national team. Considered to be one of the best goalkeepers in the world by several pundits, Oblak has won three trophies with the club, including the 2018 UEFA Super Cup by defeating city rivals Real Madrid. Born on January 7, 1993 in Škofja Loka, Slovenia, to a Slovenian father, Matjaž Oblak, and a Bosnian Serb mother Stojanka Majkić, his older sister, Teja Oblak, is a professional basketball player and a member of the Slovenia national team. Oblak started playing youth soccer for his home town club of Locan in 1999, and went to Olimpija Ljubljana Youth Academy. 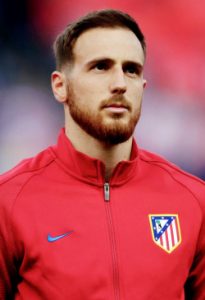 Jan Oblak Facts:
*He was born on January 7, 1993 in Škofja Loka, Slovenia.
*He began playing football when he was five at a local club named Locan.
*She signed for Portuguese club Benfica at the age of 17, and won Primeira Liga, Taca de Portugal and Taca da Liga titles in 2014.
*He made his senior international debut for Slovenia in 2012.
*Follow him on Facebook and Instagram.