Stefania Fernandez is a Venezuelan model, TV host and beauty pageant titleholder who was crowned Miss Venezuela 2008 and Miss Universe 2009. She earned a Guinness World Records by being the first Miss Universe winner who was crowned by a compatriot. In November 2009, Fernandez served as a presenter at the Latin Grammy Awards in Las Vegas, sharing with Puerto Rican salsa singer Víctor Manuelle. Born Stefanía Fernández Krupij on September 4, 1990 in Merida, Venezuela, to parents Nadia Krupij Holojad and José Luis Fernández, she is of Ukrainian, Polish, Russian and Spanish descent. Fernandez started her modeling career when she was a young girl. She has been married to Bernardo Asuaje since May 6, 2017. 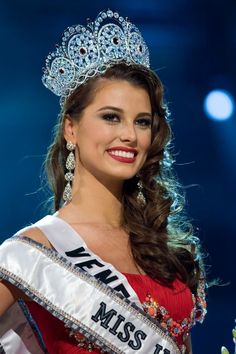 Stefania Fernandez Facts:
*She was born on September 4, 1990 in Merida, Venezuela.
*She won the title of Miss Venezuela in 2008 and the title of Miss Universe in 2009.
*She became the first Miss Universe winner who was crowned by a compatriot.
*She officially became the face of Avon Products in March 2010.
*She presented at the Latin Billboard Music Awards in Puerto Rico in April 2010.
*She became the official face of Avon Products in March 2010.
*She was accurately named as among the 50 Most Beautiful People list by People en Español, a Spanish-language magazine.
*She participated in the 2014 Venezuela Protests.
*She is the founder of “Ammaterre”.
*Follow her on Twitter, Facebook and Instagram.