Jared Leto is an American actor and singer-songwriter who received recognition for his role as Jordan Catalano on the television series My So-Called Life (1994). He has appeared in many films, notably Prefontaine, The Thin Red Line, Fight Club and Girl, Interrupted, American Psycho, Urban Legend, Requiem for a Dream, Lord of War, Chapter 27, Mr. Nobody, The Little Things, Suicide Squad, and Dallas Buyers Club. Leto formed the rock band Thirty Seconds to Mars in 1998 in Los Angeles, California, with his older brother Shannon. Their debut album, 30 Seconds to Mars (2002), was released to positive reviews but only to limited success. The band achieved worldwide fame with the release of their second album A Beautiful Lie (2005). Jared made his directorial debut in 2012 with the documentary film Artifact. 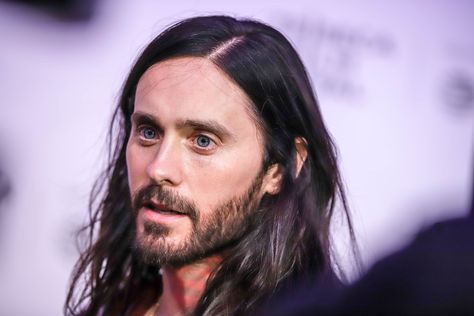 Born Jared Joseph Bryant on December 26, 1971 in Bossier City, Louisiana, to parents Constance “Connie” (Metrejon) and Anthony L. “Tony” Bryant, his older brother is drummer and actor Shannon Leto. He attended the School of Visual Arts in New York City before transferring to the University of the Arts in Philadelphia. He started his career with television appearances in the early 1990s. Leto dated actress Cameron Diaz from 1999 to 2003.

Jared Leto Facts:
*He was born on December 26, 1971 in Bossier City, Louisiana, USA.
*His ancestry includes English, French, as well as German, Irish, and Scottish.
*He wrote and performed in his first short film, Crying Joy, while attending New York City’s School of Visual Arts.
*He started his career with minor roles in the television shows Camp Wilder and Almost Home.
*He made his film debut in How to Make an American Quilt (1995).
*He played the Joker in the 2016 super villain film Suicide Squad.
*People Magazine named him one of the top 50 Most Beautiful People in the World in 1995, 1996 and 1997.
*He lost 35 pounds for his Oscar winning role as Rayon in Dallas Buyers Club.
*He was once engaged Cameron Diaz (2002).
*He was crowned the “sexiest vegetarian alive” by PETA in 2014.
*His hobbies include snowboarding, skateboarding, hiking, writing songs, painting, and reading.
*Visit his official website: www.jaredleto.com
*Follow him on Twitter, Facebook and Instagram.