Jason Schwartzman is an American actor and musician, best known for his starring roles in Funny People, Fantastic Mr. Fox, Moonrise Kingdom, Scott Pilgrim vs. the World, The Grand Budapest Hotel, Shopgirl, Spun, Rushmore, I Heart Huckabees, Marie Antoinette, Saving Mr. Banks, Klaus, and The Darjeeling Limited. He was a member of the rock band Phantom Planet. Born Jason Francesco Schwartzman on June 26, 1980 in Los Angeles, California, to actress Talia and producer Jack Schwartzman, he is the older brother of actor and musician Robert Schwartzman. In July 2009, he married his long-time girlfriend Brady Cunningham with whom he has two daughters, Marlowe Rivers and Una Schwartzman. 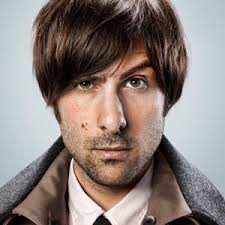 Jason Schwartzman Facts:
*He was born on June 26, 1980 in Los Angeles, California, USA.
*He is the son of actress Talia Shire and producer Jack Schwartzman.
*He is of Italian descent on his mother’s side.
*He formed the band Phantom Planet when he was 14.
*He frequently collaborations with Wes Anderson.
*He was named one of “Top 10 Most Stylish Men in America” by GQ magazine.
*He is very close friends with actress Claire Danes.