David Duchovny is an American actor. He is best known for his portrayal of FBI Agent Fox Mulder on the television series The X-Files, and as alcoholic writer Hank Moody on the television series Californication. He also played the narrator and host in the long-running Showtime erotica/soft-core TV series Red Shoe Diaries and had a recurring role as a transgender DEA agent on the series Twin Peaks. He’s also appeared in the films Kalifornia, The Secret, Evolution, The Joneses and Zoolander. As a writer, he has published three books, Holy Cow: A Modern-Day Dairy Tale, Bucky F*cking Dent and Miss Subways. Born David William Duchovny on August 7, 1960 in New York City, New York, to parents Margaret Meg Miller and Amram Ami Duchovny, he earned an A.B. in English literature from Princeton University, and an M.A. in English literature from Yale University. He married Tea Leoni in May 1997, and the couple had a daughter named Madelaine in 1999 and a son named Kyd in 2002 before divorcing in 2014. 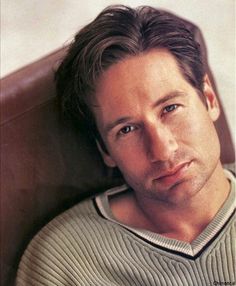 David Duchovny Facts:
*He was born on August 7, 1960 in New York City, New York, USA.
*His mother is a Scottish Presbyterian emigrant from Aberdeen, Scotland, and his father was Jewish.
*He starred in the science fiction series The X-Files, as FBI Special Agent Fox Mulder.
*People Magazine named him one of the top 50 Most Beautiful People in the World in 1996.
*He is a former vegetarian and a pescetarian.
*He is fluent in French, Hebrew and Latin.
*He was married to actress Téa Leoni from 1997 to 2014.
*Visit his official website: www.davidduchovnymusic.com
*Follow him on Twitter, YouTube, SoundCloud, Facebook and Instagram.