Jazmin Pinedo is a Peruvian actress, model and television presenter. She crowned Miss Teen Peru Universe in 2008 and represented her country in the Miss Teen international in Costa Rica. She made her debut in Peruvian cinema as Kelly in the 2011 film El buen Pedro, directed by Sandro Ventura. In the same year, she modeled for Very Verano of América Televisión. In 2012, she collaborated with the model Tilsa Lozano to make presentations. The following year she moved to Latina Televisión to the host the program Shows. Born Jazmin Tatiana Pinedo Chau on August 19, 1990 in Lima, Peru, to Libertad Chau and Teódulo Pinedo, she has one younger sister named Xiomara. She studied advertising at the Peruvian Institute of Advertising. Since 2013, she has been in a relationship with Gino Assereto with whom she has one daughter, Mia Khaleesi. 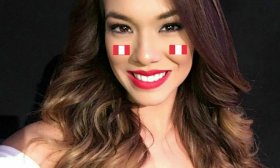 Jazmin Pinedo Facts:
*She was born in Lima, Peru.
*She was a host of the talent show Yo Soy.
*In 2012, she began dating Peruvian model and actor Jesús Neyra.
*Follow her on Twitter, Facebook and Instagram.