Jeanne Tripplehorn is an American actress. She is known for her roles in television, such as HBO drama series Big Love, Electric City, CBS police procedural drama Criminal Minds, and in the films Waterworld, The Firm and Basic Instinct. She became a member of a drama troupe at Juilliard alongside actress Laura Linney. She was born Jeanne Marie Tripplehorn on June 10, 1963 in Tulsa, Oklahoma, the daughter of Suzanne and Tom Tripplehorn. She is a 1981 graduate of Edison High School, also spent one semester at the Tulsa University. She has been married to actor Leland Orser since 2000. They have a son together. 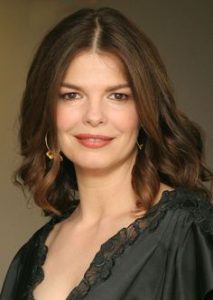 Jeanne Tripplehorn Facts:
*Her parents separated when she was two years old.
*Her father was a guitarist with Gary Lewis & The Playboys.
*She started her career as a host for a local radio and TV show.
*She was once engaged to actor Ben Stiller.
*Follow her on Twitter and Instagram.