Jeisa Chiminazzo is a Brazilian fashion model. She has appeared on the cover of nine international versions of Vogue. She is also known for her contracts with Yves Saint Laurent, Prada, Dior, Fendi & Lanvin, Chanel, Tiffany, and Topshop. She has also appeared in several fashion campaigns, for designers such as Emanuel Ungaro and Jill Stuart. Born on April 12, 1985 in Muçum, Rio Grande do Sul, Brazil, to parents Ernani and Ivone of Italian and German descent, she was raised with her two sisters; Grace and Jéssica. She was discovered at 13 by a Brazilian actor who recommended her to a modeling agency. She married British businessman Oliver Ripley in August 2013. 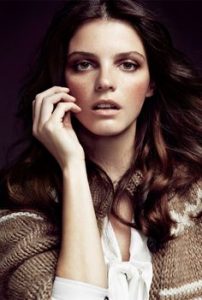 Jeisa Chiminazzo Facts:
*She was born in Muçum, Brazil on April 12, 1985.
*She wanted to be an architect.
*She appeared in Italian editions of Elle and Marie Claire after she signed with IMG Models in New York.
*She is good friends with Lindsay Lohan, Sean Lennon, Kate Moss, Isabeli Fontana, Jessica Stam, Brad Kroenig and Ana Beatriz Barros.
*Her favorite colors are Green and Pink.
*Visit her Official Facebook Fan Page.
*Follow her on Twitter and Instagram.