Jennie Finch is an American, former collegiate All-American and medal winning Olympian, retired 2-time pro All-Star, right-handed hitting softball pitcher. Finch pitched for the Arizona Wildcats, the USA national softball team and the Chicago Bandits. In 2011, Finch became an ESPN analyst for college softball, and became a contestant on Dancing with the Stars in 2018. 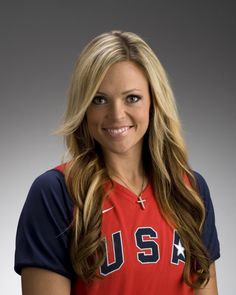 Born Jennie Lynn Finch on September 3, 1980 in La Mirada, California, to parents Doug and Bev Finch, she has two older brothers named Shane and Landon. Finch majored in communications from University of Arizona. She has been married to Casey Daigle since 2005. They have three children.

Jennie Finch Facts:
*She was born on September 3, 1980 in La Mirada, California, USA.
*She started playing softball at age five and pitching at age eight.
*Her father was her first pitching coach.
*She began her career on February 5, 1999, winning a run-rule game against the UIC Flames.
*She led Team USA to gold at the 2004 Summer Olympics and silver at the 2008 Olympics.
*She is an avid fan of the Los Angeles Dodgers.
*She cited her Christian faith while on the show Dancing With the Stars when she refused to dance to a Janelle Monáe song because she deemed it too risque.
*In July 2010, Finch announced her retirement from softball to focus on her family.
*Visit her official website: www.jenniefinch.com
*Follow her on Twitter, Facebook and Instagram.