Jessica Chastain is an American actress of film, television, and stage. She is best known for her roles in the films Zero Dark Thirty and The Help. She played Mrs. O’Brien in the 2011 film The Tree of Life. She has also starred in the films Interstellar, Take Shelter, The Martian, Coriolanus, Mama, A Most Violent Year, Madagascar 3: Europe’s Most Wanted, Miss Sloane, and Molly’s Game. Her accolades include a Golden Globe Award and two Academy Award nominations. Born Jessica Michelle Chastain on March 29, 1981 in California, USA to Jerri Chastain and Michael Monasterio, she was raised by her mother and stepfather. She was a member of Juilliard’s Drama Division’s Group 32 alongside actors Michael Urie and Jess Weixler. She has been married to Gian Luca Passi de Preposulo since 10 June 2017. 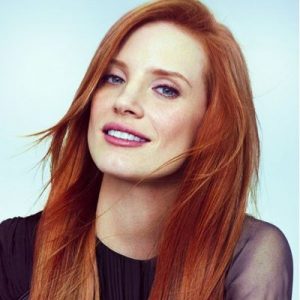 Jessica Chastain Facts:
*Her mother is a vegan chef.
*She was the first member of her family to attend college.
*She received Academy Award nominations for her works in Zero Dark Thirty and The Help.
*She was named in TIME’s 2012 list of 100 Most Influential People in the World.
*She was named the Sexiest Smile by Victoria Secret’s “What Is Sexy” list in 2012.
*She is a vegan and was named PETA’s sexiest vegetarian in 2012.
*She has a three-legged dog named Chaplin.
*She cites Isabelle Huppert, Cate Blanchett, Tilda Swinton, Emily Watson, Julianne Moore and Marion Cotillard as her idols.
*She was once in a relationship with Ned Benson.
*Follow her on Twitter, Facebook and Instagram.