Jessica Ennis-Hill is a retired British track and field athlete who was the 2012 Olympic champion, a three-time world champion, and the 2010 European champion. She is also the 2010 world indoor pentathlon champion. At 2012 London Olympics, Jessica broke the British national record for the high jump and the 100 meter hurdles. Born Jessica Ennis on January 28, 1986 in Sheffield, United Kingdom, to parents Alison Powell and Vinnie Ennis, she is of Jamaican descent on her father’s side, and of English descent on her mother’s side. She has a younger sister named Carmel. At age 14, Jessica won the high jump at the National Schools Championship, becoming a National Schools Champion. She is married to Andy Hill, with whom she has two children. 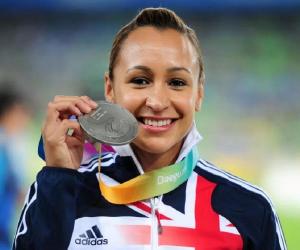 Jessica Ennis-Hill Facts:
*She was born on January 28, 1986 in Sheffield, United Kingdom.
*Her parents introduced her to athletics by taking her to a Start:Track event at Sheffield’s Don Valley Stadium during the 1996 school summer holidays.
*She has a pet named Mila.
*She is an ambassador for the Jaguar Academy of Sport and a patron of both the Sheffield Children’s Hospital charity and Barrie Wells’ sports foundation.
*She is a columnist for The Times newspaper and advertises Aviva, Omega watches, Powerade, BP, Adidas, Olay Essentials, and Santander UK
*Visit her official website: www.jessicaennis.net
*Follow her on Twitter, Facebook and Instagram.