Kate Upton is an American model and actress. She is most known for her appearances in the Sports Illustrated Swimsuit Issue. She was named Rookie of the Year after she graced the cover of the 2011 Sports Illustrated Swimsuit Issue. She was also the cover model for the 2012, 2013 and 2017 issues. She has also featured on the covers of Italian, American, and British Vogue, American, Italian, and German GQ, French and American Elle, Esquire, and Vanity Fair. Her films credits include 2011’s Tower Heist and 2014’s The Other Woman. Born Katherine Elizabeth Upton on June 10, 1992 in St. Joseph, Michigan, to Shelley and Jeff Upton, she began modeling at the age of 15. Her first modelling assignment was to model the clothing for Dooney & Bourke and Garage. In 2011, she began dating MLB pitcher Justin Verlander. They married in November 2017. 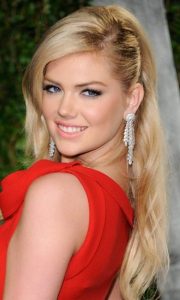 Kate Upton Facts:
*Her father was an athletics director and her mother was a Texas state tennis champion.
*Her great-grandfather co-founded Whirlpool.
*She began modeling at the age of 15.
*She was listed #12 on Maxim’s “Hot 100” list in 2014.
*She adopted a boxer dog named, Harley, in 2011.
*She is friends with Cameron Diaz, Christie Brinkley, Brooklyn Decker, Chrissy Teigen, Nicki Minaj, and Chris Noth.
*Visit her official website: www.kateupton.com
*Follow her on Twitter, Facebook and Instagram.