Jimmy McKenna is a Scottish actor. He is best known for his portrayal of Jack Osborne on the Channel 4 soap opera Hollyoaks, and for his recurring role as Sgt. Don Brady in the ITV series A Touch of Frost. He has also appeared in Waterfront Beat, Heartbeat, Between the Lines, Coronation Street, Pie in the Sky, and Taggart. 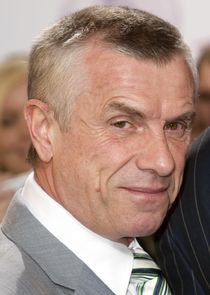 Born James Stephen McKenna on August 31, 1953 in Glasgow, United Kingdom, his first job was as a professional footballer, and his football career with Sheffield Wednesday F.C. ended after a back injury. He has four children with his wife, Beverly Mckenna.

Jimmy McKenna Facts:
*He was born on August 31, 1953 in Glasgow, United Kingdom.
*He was a professional football player before becoming an actor.
*He has played Jack Osborne in the Channel 4 soap opera, Hollyoaks, since 1996 and is the second longest-serving character in the serial.
*He is a fan of Frank Sinatra as well as Sammy Cahn and Dean Martin.