Mishti Mukherjee is an Indian actress who appears mainly in Telugu and Hindi cinema, in addition to Bengali, Tamil, Kannada and Malayalam films. Her notable film appearances include: Kaanchi: The Unbreakable, Chinnadana Nee Kosam, Adam Joan, Brihaspathi, and Burra Katha. 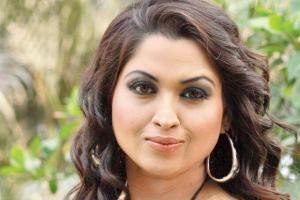 Born Indrani Chakraborty on December 20, 1987 in Kolkata, West Bengal, India, into a Bengali family, her mother Beena Chakraborty is a housewife and her father is a construction businessman. Mukherjee graduated in English literature from Kolkata University.

Mishti Mukherjee Facts:
*She was born on December 20, 1987 in West Bengal, India.
*She has been using the name Mishti professionally since 2014
*She made her Bollywood debut with Subhash Ghai’s film Kaanchi: The Unbreakable (2014).
*She made her Telugu film debut with the Nithiin-A. Karunakaran film Chinnadana Nee Kosam (2014).
*She made her Malayalam film debut with Prithviraj Sukumaran and Jinu Abraham’s film Adam Joan (2017).
*She is the brand ambassador for Vicco turmeric.
*She had a private coaching centre in West Bengal.
*She is an avid animal lover.
*Follow her on Twitter, TikTok and Instagram.