Julie Hesmondhalgh is an English actress. She is best known for her portrayal of Hayley Cropper in the ITV soap opera Coronation Street, for which she won Best Serial Drama Performance at the 2014 National Television Awards and Best Actress at the 2014 British Soap Awards. Her other notable television appearances include: Cucumber, Happy Valley, The Trouble with Maggie Cole, and Broadchurch. Hesmondhalgh’s stage credits include God Bless the Child at the Royal Court Theatre in London, and Wit at the Royal Exchange, Manchester. Born Julie Claire Hesmondhalgh on February 25, 1970 in Accrington, United Kingdom, she studied at the London Academy of Music and Dramatic Art (LAMDA) from 1988-1991. She is married to screenwriter Ian Kershaw. They have two daughters together. 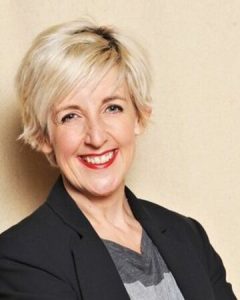 Julie Hesmondhalgh Facts:
*She was born on February 25, 1970 in Accrington, United Kingdom.
*She was involved in local amateur theatre and studied A-level Theatre Studies at Accrington and Rossendale College under Martin Cosgrif.
*She portrayed the character of Hayley Crooper in the ITV soap opera Coronation Street between 1998 and 2014.
*She is a Labour Party member.
*She is a supporter of Arts Emergency and a mentor with the National Youth Theatre.
*Follow her on Twitter and Facebook.