John Millman is an Australian professional tennis player who achieved a career-high singles ranking of World No. 37 on September 10, 2018. He beat Roger Federer in the fourth round of the 2018 US Open. John is coached by Irish former professional player Louk Sorensen. Born John H. Millman on June 14, 1989, in Brisbane, Australia, to parents Shona and Ron Millman, John is the second-youngest of five children and the only son. His sisters are Tessa, Shona, Kara, and Bronte. He was introduced to tennis at the age of four and turned professional in 2006. He made his first ATP career final in April 2018 at the Hungarian Open, but lost in straight sets to Marco Cecchinato. 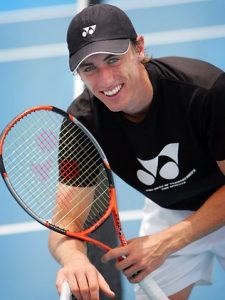 John Millman Facts:
*He was born on June 14, 1989, in Brisbane, Australia.
*His father works as a teacher and his mother is a primary school PE teacher.
*He was only 4 when he started playing tennis.
*He made his ITF junior debut in 2004.
*He turned professional in 2006.
*He won the 2018 Open du Pays d’Aix tournament.
*He is a supporter of English Fooltball Club, Liverpool FC.
*His hobbies include music, movies, running, soccer and golf.
*His favourite bands are The Temper Trap and The Killers.
*Follow him on Twitter and Instagram.