American actor, dancer and singer who rose to stardom in the 1970s, after appearing on the television series Welcome Back, Kotter and starring in the box office successes Saturday Night Fever and Grease. Travolta’s other notable appearances include Pulp Fiction, Face/Off, Swordfish, Ladder 49, Get Shorty, Wild Hogs, Primary Colors, and Hairspray. Born John Joseph Travolta on February 18, 1954 in Englewood, New Jersey, he was the youngest of six children of Helen and Salvatore Travolta. He attended Dwight Morrow High School, but dropped out as a junior at age 17 in 1971. Travolta married actress Kelly Preston in 1991. They had a son, Jett (1992–2009). Their daughter, Ella Bleu, was born in 2000. Their son, Benjamin, was born on November 23, 2010 in Florida. Preston died of breast cancer in July 2020. 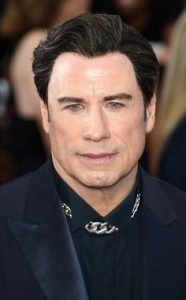 John Travolta Facts:
*He was born on February 18, 1954 in Englewood, New Jersey, USA.
*He was raised Roman Catholic, but changed to Scientology in 1975.
*Growing up, his favorite actor was James Cagney.
*He was named as one of twelve “Promising New Actors of 1976” in John Willis’ Screen World, Vol. 28.
*He lost 20 pounds for his role in Saturday Night Fever (1977).
*He was named Man of the Year by Harvard’s Hasty Pudding Club in 1981.
*For his role in the 1998 movie Primary Colors, Travolta was told to gain thirty pounds.
*He was voted the 64th Greatest Movie Star of all time by Entertainment Weekly.
*He is best friends with Kirstie Alley, and good friends with actor Forest Whitaker.
*His is friends with actor Billy Lockwood, and close friends with Dakota Fanning and Robin Williams.
*He is fluent in French.
*His wife, Preston died of breast cancer in July 2020.
*Visit his official website: www.travolta.com
*Follow him on Facebook and Instagram.