JoJo is an American actress, singer, and songwriter whose debut studio album, JoJo, released in June 2004, peaked at number four on the US Billboard 200 and was later certified platinum by the Recording Industry Association of America (RIAA), selling over four million copies worldwide to date. The album’s lead single “Leave (Get Out)” peaked at number No.1 of the US Billboard Pop Chart, making JoJo, at age 13, the youngest solo artist to ever have a number-one single on that chart. The song peaked at 12 on the Billboard Hot 100 and was certified gold by the RIAA along with its follow-up single “Baby It’s You”. JoJo’s second studio album, The High Road, released on October 17, 2006, peaked at number three on the Billboard 200 and was certified gold in the United States, Canada, and the United Kingdom . The album’s lead single, “Too Little Too Late”, became a top five hit on the Billboard Hot 100. The song broke Mariah Carey’s record for the biggest jump into the top three entry on the chart when it moved from number 66 to number three. “Too Little Too Late” also reached the top ten in the UK and nine other countries. JoJo made her film debut in Aquamarine (2006) and R.V.(2006). 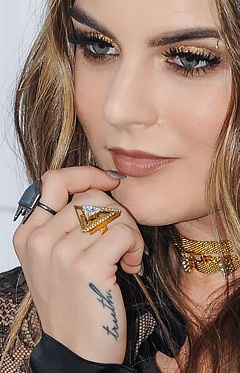 JoJo Education:
She graduated from high school in August 2009, and attended Northeastern University.

JoJo Facts:
*Born on December 20, 1990 in Brattleboro, Vermont, she was raised in Keene, New Hampshire and Foxborough, Massachusetts.
*She is of French-Canadian descent on her father’s side, and of Polish, English, Irish and Scottish descent on her mother’s side.
*She began performing in singing competitions and local talent shows from a young age.
*Growing Up, she was a big fan of Whitney Houston, Etta James, Aretha Franklin & Ella Fitzgerald.
*She competed on the television show America’s Most Talented Kids, and performed on Oprah and Maury.
*She released her debut studio album, JoJo, in June 2004.
*She is the youngest solo artist to have a number 1 song in America.
*She is friends with Sara Paxton, Paula DeAnda, Zelda Williams and Emma Roberts.
*She is a huge Red Sox fan.
*She has one dog named Sugarpie.
*She lost her virginity at 14.
*She was in a relationship with soccer player Freddy Adu from May 2005 to September 2006.
*Visit her official website: www.JoJoOnline.com