Jolin Tsai is a Taiwanese singer and dancer whose debut studio album, 1019, was released in September 1999. The album includes the hit singles, “Living with the World” and “I Know You’re Feeling Blue”. Tsai’s fifth album, Magic (2003), is regarded as one of her biggest successes so far, right after her eighth album, Dancing Diva (2006), which became one of her most critically acclaimed releases. Her accolades include six Golden Melody Awards, an Mnet Asian Music Award, an MTV Asia Award, and an MTV Video Music Award. Tsai made her acting debut as a guest appearance in the 2001 TV series, Six Friends. Born Tsai I-ling on September 15, 1980 in Xinzhuang District, Taipei, Taiwan, to parents Tsai Chu-chen and Huang Chun-mei, she has a sister named Jo Tsai. She did her schooling from Hsinchuang Junior High School and Jingmei Girls’ High School, and majored in English literature from Fu Jen Catholic University. 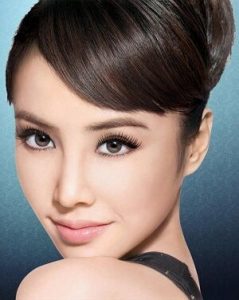 Jolin Tsai Facts:
*Born on September 15, 1980 in Xinzhuang District, Taipei, Taiwan, her father is of Han Chinese descent, while her mother is half Han Chinese and half Papora.
*She studied English literature at Fu Jen Catholic University.
*She began her singing career by winning the champion at an MTV singing competition in 1998, at the age of 18.
*She won an 2001 MTV Video Music Award for International Viewer’s Choice Award.
*She won a 2015 Mnet Asian Music Award for Best Asian Artist.
*She’s referred to as the “Queen of C-Pop”.
*She is a fan of Madonna, Whitney Houston, Destiny’s Child, and Mariah Carey.
*Janet Jackson, Kylie Minogue, Sandy Lam, Faye Wong, CoCo Lee, and Amei Chang are her musical inspirations.
*Follow her on YouTube, Facebook and Instagram.