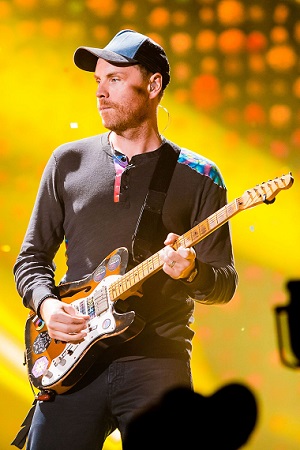 Jonny Buckland is a Welsh musician and songwriter born in London, United Kingdom. He is best known as the lead guitarist and co-founder of rock band Coldplay, with whom he has won several accolades, including seven Grammy Awards and nine Brit Awards. The band have sold over 100 million albums worldwide, making them the most successful band of the 21st century and one of the world’s best-selling music artists. Coldplay’s best-known songs include “Yellow,” “Don’t Panic” and “Fix You.”

He married jewelry designer Chloe Lee-Evans in 2009; they have two children, Violet and Jonah.

Jonny Buckland Facts:
*He was born on September 11, 1977 in Islington, London, United Kingdom, to high school teachers John and Joy Buckland.
*He first started playing the guitar at age eleven.
*He studied mathematics and astronomy at University College London.
*He and Chris Martin formed Coldplay in 1996 at University College London.
*He is a lifelong fan of Tottenham Hotspur.
*Visit his band’s official website: www.coldplay.com