Joy Villa is an American singer-songwriter and actress who released her debut EP titled I Make the Static in 2014. The EP ranked #2 on the Digital Albums chart and #6 on the Top Album Sales chart. She has appeared as a guest-star in several television series such as Heroes, CSI: NY, The Valley Girls and MTV Next. She is also notable for wearing large attention grabbing dresses at the Grammy Awards. Born Joy Angela Villa on April 25, 1986 in Orange, California, to parents Mildred Angela Pierce Villa and Rev. Joseph Villa, she is of Italian descent on her father’s side, and of African American descent on her mother’s side. She graduated from Lompoc High School in 2004. She was married to Thorsten von Overgaard from 2016 to 2019. 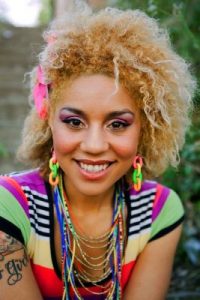 Joy Villa Facts:
*She was born on April 25, 1986 in Orange, California, USA.
*She has been performing from the age of 5.
*She was educated at Lompoc High School in Santa Barbara County, California.
*She started working as a producer when she was 10 years old.
*She released a book called “Poems by the Princess” in 2013.
*She is a supporter of Donald Trump, having joined Donald Trump’s Campaign Advisory Board.
*Visit her official website: www.joyvilla.com
*Follow her on Twitter, SoundCloud, YouTube, Facebook and Instagram.