Kate Moss is an English model, fashion designer and businesswoman, who rose to fame in the early-1990s as part of the heroin chic fashion trend. One of the world’s leading models, Kate Moss has appeared on the cover of more than 300 magazines. She has also modelled for many fashion houses, including Chanel, Gucci, Dolce & Gabbana, Burberry and Christian Dior. Besides her career in modeling, she has started several ventures, including her own clothing line and various musical projects. Born Katherine Ann Moss on January 16, 1974 in Croydon, London, England, to Linda Rosina Shepherd and Peter Edward Moss, she has one younger brother named Nick, and a half-sister named Charlotte. She was educated at Ridgeway Primary School and Riddlesdown Collegiate. She was discovered at JFK airport in NYC by Storm Models Agency at the age of 14. She was married to guitarist Jamie Hince from 2011 to 2016. She has a daughter named Lila Grace Moss. 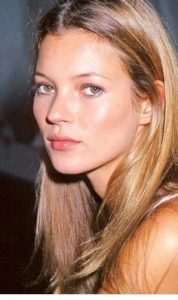 Kate Moss Facts:
*Born in Croydon, London, England, her parents divorced when she was 13.
*She is a vegan.
*On April 7, 2008, she was named Best Dressed woman by Glamour magazine.
*TIME magazine named her one of the 100 most influential people in the world in 2012.
*She is best friends with model Frankie Rayder, actress/designer Sadie Frost, and designer Stella McCartney.
*She is Good friend with actor Daniel Craig, Liv Tyler, and Irina Lazareanu.
*She is friends with Rita Ora, and Naomi Campbell.
*She has a tiny heart tattooed on her hand.
*She was in a relationship with Johnny Depp from 1994 to 1998.
*Visit her official website: www.katemoss.com
*Follow her on Instagram.