American actress who first gained attention with her role on the soap opera As The World Turns, for which she earned a Daytime Emmy Award for Outstanding Ingenue in a Drama Series in 1988. She is best known for her roles in the films Boogie Nights, The Hours, Far From Heaven, Game Change, The Lost World: Jurassic Park and The Kids Are All Right. She has also starred in the films The Big Lebowski, Magnolia, Hannibal, Children of Men, A Single Man, and Crazy, Stupid, Love. Moore won an Oscar for Best Actress for her performance in the 2014 independent drama film Still Alice, and earned an Emmy Award for her portrayal of Sarah Palin in the television film Game Change. Born Julie Anne Smith on December 3, 1960 in Fayetteville, North Carolina, to parents Anne and Peter Moore Smith, Moore is the oldest child of three, with a younger sister, Valerie Smith, and a younger brother, the novelist Peter Moore Smith. She has been married to Bart Freundlich since August 23, 2003. They have two children. Moore was previously married to John Gould Rubin from 1986 to 1995. 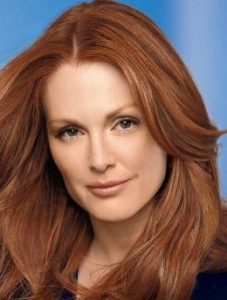 Julianne Moore Facts:
*She was born on December 3, 1960 in Fayetteville, North Carolina, to an American father and a Scottish mother.
*Her father was a military in the US Army, and her mother had emigrated from Scotland.
*She studied Theatre at Boston University.
*She made her acting debut on television in 1984 in the mystery series The Edge of Night.
*People Magazine named her one of the top 50 Most Beautiful People in the World in 2001.
*She is friends with Colin Firth, and Ellen Barkin.
*She’s a natural redhead.
*Visit her official website: www.juliannemoore.net
*Follow her on Twitter and Instagram.