American figure skater who is the 2006 U.S. Champion, a three-time World Championship medalist, the 2003 Grand Prix Final Champion, and the 2006 Olympic silver medalist. Sasha is notable for her artistry, flexibility and body lines, and musical interpretation, and is the most recent American woman to medal individually in figure skating at the Olympics as of 2020. She played Fiona Hughes in the 2007 feature film, Moondance Alexander. Born Alexandra Pauline Cohen on October 26 1984, in Westwood, a neighborhood in Los Angeles, her father, Roger Cohen, is a Jewish American business consultant who used to practice law, and her mother, Galina Feldman, is a Jewish immigrant from Ukraine & a former ballerina. She has a younger sister named Natalia (a.k.a. “Natasha”). She did her schooling from Futures High School in Mission Viejo, California, and obtained a degree in political science at Columbia University in 2016. In 2019, Sasha became engaged to Geoffrey Lieberthal, an equity partner who is also the son of political scientist Kenneth Lieberthal. Together they have one son, Dashiell Lev Lieberthal. She was previously married to Tom May. 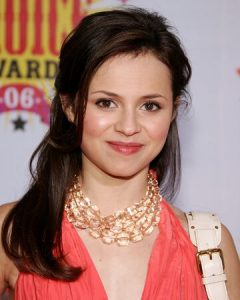 Sasha Cohen Facts:
*She was born on October 26, 1984 in Westwood, California, USA.
*She was named after her mother’s favorite ballerina & goes by Sasha, the Ukrainian nickname for Alexandra.
*She used to be a gymnast before she became a figure skater.
*She began skating when she was seven years old and by 15, had won the silver at the U.S. National Championships.
*Her first trainer was Anton Yelchin’s mother, Irina.
*She was voted the “Hottest Woman in Sports” in 2003
*She published her autobiography, Fire on Ice, in 2005.
*She won silver at the 2006 Winter Olympics.
*She inducted into the U.S. Figure Skating Hall of Fame in 2016, and the International Jewish Sports Hall of Fame in 2019.
*She loves sushi.
*Visit her official website: www.sashacohen.com
*Follow her on Twitter, Facebook and Instagram.