Juliette Binoche is a French actress born in Paris. Binoche won an Oscar for Best Supporting Actress for her work in the 1996 film The English Patient. She played Vianne Rocher in the 2000 romantic comedy film Chocolat, for which she was nominated for an Academy Award for Best Actress. Her other notable film roles include Three Colors: Blue, Damage, Mauvais Sang, Code Unknown, The Horseman on the Roof, Camille Claudel 1915, Les Amants du Pont-Neuf, Godzilla, Cache, Breaking and Entering, Code Unknown, Clouds of Sils Maria, and Let the Sunshine In. Born Juliette Stalens Binoche on March 1, 1964 in Paris, France, her father, Jean-Marie Binoche, was an actor and director, and her mother, Monique Stalens, was an actress and acting teacher. She is of French descent on her father’s side, and of French, Belgian, and Polish descent on her mother’s side. She attended and graduated from the CNSAD (National Conservatory of Dramatic Art of Paris). She has two children, Hana and Raphaël. 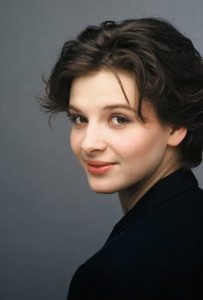 Juliette Binoche Facts:
*Born in Paris, France on March 1, 1964, her parents separated when she was only two years old.
*Her maternal grandparents were Poles.
*In 1995, she was placed at #48 in the list of ‘100 Sexiest Stars in film history’ by Empire magazine.
*People Magazine named her one of the top 50 Most Beautiful People in the World in 1997.
*In October 1997, she ranked #93 in Empire (UK) magazine’s “The Top 100 Movie Stars of All Time” list.
*She used to work as a cashier in a large department store in Paris while taking theater classes.
*Follow her on Twitter, Facebook and Instagram.