Former Indian cricketer, Kapil Dev is widely considered to be one of the greatest cricketers of all time. He led India to victory at the 1983 Cricket World Cup. He started his career by playing for Haryana in domestic cricket in 1975. In 2002, he was voted India’s Cricketer of the Century. He was born to Ram Lal Nikhanj and his wife Raj Kumari in Chandigarh, Punjab, India as Kapildev Ramlal Nikhanj. He married Romi Bhatia in 1980. Together they have one daughter, Amiya Dev. 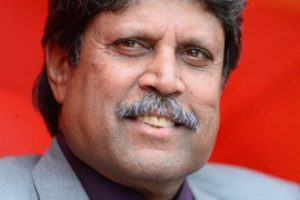 Kapil Dev Facts:
*His parents had migrated to India during the partition in 1947.
*He captained India to a World Cup victory in 1983.
*He was selected as a member of the ICC Cricket Hall of Fame in 2010.
*He is the only player to have taken more than 400 wickets in the history of cricket.
*Follow him on Twitter.

“I feel that World Cup cricket should be played like football in which all the 160 countries take part. If only a handful of countries are going to keep on playing in the World Cup without making the game popular, I will be a sad man.” – Kapil Dev