Kat Dennings is an American actress. She is best known for her portrayal of Max Black on CBS’s 2 Broke Girls, and for her roles in Nick and Norah’s Infinite Playlist and the Thor films. She has also starred in the films The 40-Year-Old Virgin, Big Momma’s House 2, Charlie Bartlett, Raise Your Voice, and The House Bunny, Defendor. Dennings starred as Sarah on the short-lived WB sitcom Raising Dad from 2001 to 2002. She has appeared as a guest-star in several television series such as Without a Trace, and The Newsroom. In 2019, Dennings began starring in the Hulu comedy series Dollface. Born Katherine Victoria Litwack on June 13, 1986 in Philadelphia, Pennsylvania, to parents Ellen Judith and Gerald J. Litwack, she is the youngest of five children. She graduated from high school early at age fourteen, and moved with her family to Los Angeles to pursue her acting career. Dennings made her first appearance in a guest role on a 2000 episode of HBO’s Sex and the City. In 2007, Dennings dated actor Matthew Gray Gubler. From December 2011 to 2014, she dated 2 Broke Girls recurring actor Nick Zano. From 2014 to 2016, Dennings dated singer Josh Groban. 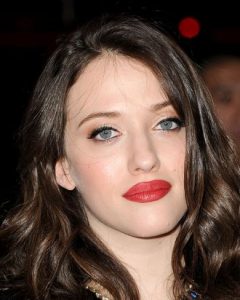 Kat Dennings Facts:
*She was born on June 13, 1986 in Philadelphia, Pennsylvania, USA.
*Her mother is a poet and speech therapist, and her father is a molecular pharmacologist.
*She is of Russian Jewish descent.
*She started her career in commercials at the age of ten.
*She made her acting debut in 2000.
*She is near-sighted.
*She is good friends with Evan Rachel Wood.
*One of her big passions in life is writing.
*Visit her official website: www.katdennings.com
*Follow her on Twitter, YouTube, Facebook and Instagram.