Ronald Koeman is a Dutch professional football manager and former player, who is the current head coach of La Liga club Barcelona. Koeman played professional football with Groningen from 1955 to 1960, Blauw-Wit Amsterdam from 1980 to 1983, Ajax from 1983 to 1986, PSV from 1986 to 1989, Barcelona from 1989 to 1995 and Feyenoord until his retirement. He won the La Liga title with Barcelona four consecutive years from 1991 to 1994 and scored the goal which won the club the European Cup title in 1992. With the Netherlands national team, Koeman won UEFA Euro 1988 and played at the UEFA Euro 1992, 1990 and 1994 FIFA World Cups, captaining the team at the latter. As a head coach, Koeman has won three Eredivisie titles: twice with Ajax and once with PSV. He was the manager of the Netherlands national team between 2018 and 2020. Born on March 21, 1963 in Zaandam, Netherlands, Koeman is the younger brother of his former international teammate Erwin Koeman and the son of former Dutch international Martin Koeman. He has been married to Bartina Koeman since December 27, 1985. He has three children; Debbie, Tim and Ronald. 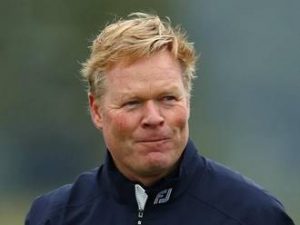 Ronald Koeman Facts:
*He was born on March 21, 1963 in Zaandam, Netherlands.
*He made his professional debut with Groningen in 1980.
*He set the La Liga for most consecutive penalty kick conversions with 25.
*He played professional football for: FC Groningen, Ajax Amsterdam, PSV Eindhoven, FC Barcelona, Feyenoord Rotterdam and the Netherlands national team.
*On August 19, 2020, he was announced as the new manager of Barcelona on a two-year contract until June 30, 2022.
*He is an ambassador for the anti-smoking campaign Kick it with Help.
*Follow him on Twitter, Facebook and Instagram.