Kate Beckinsale is a British actress who starred in the films Pearl Harbor (2001), Serendipity (2001), Underworld (2003), The Aviator (2004), and Van Helsing (2004). Kate’s other notable works include Tiptoes (2003) and Click (2006). Born Kathrin Romary Beckinsale on 26 July 1973 in London, England, to actors Judy Loe and Richard Beckinsale, she has one paternal half-sister, actress Samantha Beckinsale. She was educated at Godolphin and Latymer School in Hammersmith, West London and attended New College, Oxford, England where she studied French and Russian Literature, before dropping out in her third year to pursue acting. Kate made her film debut in Much Ado About Nothing while she was attending the University of Oxford. She was married to Len Wiseman from 2004 until 2016. She had a daughter named Lily Mo Sheen in 1999 with Welsh actor Michael Sheen. 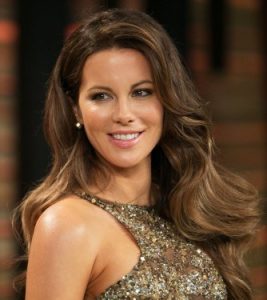 Kate Beckinsale Facts:
*She was born on 26 July 1973 in London, England.
*He father, Richard Beckinsale, passed away tragically early in 1979 when Kate was just 5 years old.
*She suffered from anorexia when she was 15 years old and had to be treated for 4 years.
*She was named Hello magazine’s “England’s Number One Beauty” in 2002.
*She was named Esquire magazine’s “Sexiest Woman Alive” in 2009.
*She has a dog named Myf and a cat named Clive.
*Follow her on Twitter, Facebook and Instagram.