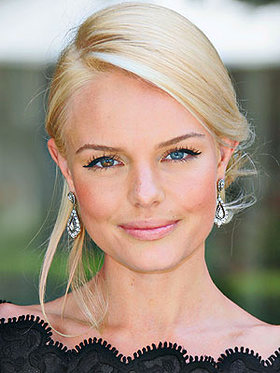 Born on January 2, 1983 in Los Angeles, California, she is an only child of Patricia (Potter), a homemaker, and Harold Bosworth, who was an executive for Talbots. She wanted to be a competitive horse racer and was a champion equestrian at the age of 14. She graduated from Cohasset High School, in Cohasset, Massachusetts, in 2001.

She dated Orlando Bloom from 2002 to 2005. On August 31, 2013, she married American director Michael Polish. In August 2021, Bosworth announced her separation from Polish. As of January 2022, it was reported that Bosworth is in a relationship with actor Justin Long.

Kate Bosworth Facts:
*She was born on January 2, 1983 in Los Angeles, California, and was raised in San Francisco, California.
*Her ancestry includes English, Irish, German, Cornish, and Welsh.
*She played varsity soccer and lacrosse in high school.
*She is fluent in both English and Spanish.
*She has a fear of flying.
*She is the brand ambassador for P&G’s skincare product, SK-II Malaysia (2013).
*She is a member of Soka Gakkai International, an organization of Nichiren Buddhism and Mahayana Buddhism.
*Her eyes are two different colors: Blue and Brown, a condition called heterochromia iridis.
*She has two cats named Louise and Dusty.
*She enjoys running, pilates and often practices meditation.
*Follow her on Twitter, Facebook, YouTube and Instagram.