Kate Gosselin is an American television personality, author and former nurse. She is most famous for her appearances on Jon and Kate Plus 8. She used to work as a registered nurse and later as a labor and delivery nurse. Her 2008 book, Multiple Blessings, debuted at number five on The New York Times Best Sellers list and sold over 500,000 copies by the end of 2009. Born as Katie Irene Kreider on March 28, 1975 in Philadelphia, Pennsylvania to Kenton Kreider and Charlene Kreider, Kate has four siblings; three sisters Kendra, Rissa, Chris and a brother Kevin. She belongs to German, Scottish, and English descent. She married Jon Gosselin in 1999 and divorced in June 2009.She is mother of eight children named Cara, Hannah, Madelyn, Collin, Joel, Aaden, Alexis and Leah. She dated millionaire Jeff Prescott in 2015. 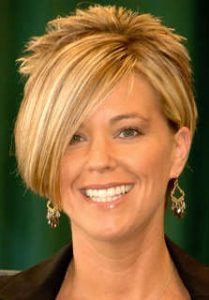 Kate Gosselin Facts:
*She was born March 28, 1975 in Philadelphia, Pennsylvania.
*She is the mother of one of the only thirteen sets of sextuplets in the USA.
*She joined an episode of Celebrity Wife Swap with Kendra Wilkinson.
*In season 10 of Dancing with the Stars, she was defeated by Nicole Scherzinger.
*One of her favorite movies is Dirty Dancing (1987).
*Visit her official website: www.kateplusmy8.com
*Follow her on Twitter, Facebook and Instagram.