Whitney Port is an American television personality, fashion designer, and author born in Los Angeles, California. She is best known for her appearances in the TV series The Hills (2006-2008) and The City (2008-2010). She was also a judge on the eighth cycle of Britain & Ireland’s Next Top Model in 2012. She published her work True Whit: Designing a Life of Style, Beauty, and Fun in 2011. Born as Whitney Eve Port on March 4, 1985 in Los Angeles, California to Vicki Port and Jeffrey Port, she has an older brother, Ryan, an older sister, Ashley, and two younger sisters, Paige and Jade. She has been married to Tim Rosenman since November 7, 2015. They have a son together. 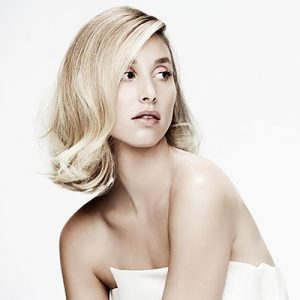 Whitney Port Facts:
*She was born and raised in Los Angeles, California.
*She lost her father from a battle with kidney cancer in March 2013.
*She used to work for Kelly Cutrone at Kelly’s “People’s Revolution”.
*She is close friends with Lauren Conrad.
*She served as a fashion contributor for Teen Vogue.
*In 2009, she launched her fashion line Whitney Eve.
*Visit her official website: www.whitneyport.com
*Follow her on YouTube, Twitter, Facebook and Instagram.