Kate Winslet is an English actress, best known for her starring role as Rose DeWitt Bukater in the 1997 classic Titanic. She won an Academy Award for Best Actress for her role as Hanna Schmitz in the 2008 film The Reader. Her other notable film appearances include: Sense and Sensibility, Iris, Hideous Kinky, Finding Neverland, Eternal Sunshine of the Spotless Mind, Quills, Revolutionary Road, Little Children, The Dressmaker, and Steve Jobs. Born Kate Elizabeth Winslet on October 5, 1975 in Reading, Berkshire, England, to parents Sally and Roger Winslet, she is the second of four children, her sisters are the actresses Beth and Anna Winslet and her brother is Joss Winslet. At age 11, Winslet attended the Redroofs Theatre School to study Drama. She made her film debut as Juliet Hulme in Peter Jackson’s crime film Heavenly Creatures (1994). She has been married to Edward Abel Smith since December 5, 2012. She was previously married to Jim Threapleton from 1998 to 2001 and director Sam Mendes from 2003 to 2011. She has two sons named Joe and Bear and a daughter named Mia. 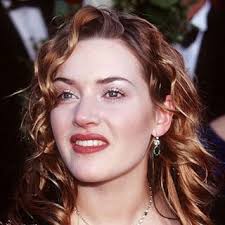 Kate Winslet Facts:
*She was born on October 5, 1975 in Reading, Berkshire, England, UK.
*Her parents are Sally Bridges-Winslet and Roger Winslet and her sister is the actress Beth Winslet.
*Studied drama at the Redroofs Theatre School.
*She worked as an assistant director in the 1998 film Hideous Kinky.
*One of People magazine’s 50 Most Beautiful People in the World (1996), (2004) (2005).
*She is a huge fan of Rufus Wainwright’s CD, “Poses”.
*She has worked with six directors who have won a Best Director Oscar: Peter Jackson, James Cameron, Sam Mendes, Ang Lee, Roman Polanski and Danny Boyle.
*She has featured on over 300 magazine covers around the world.