Katelyn Tarver is an American actress and singer. She is best known for portraying Jo Taylor on the Nickelodeon series Big Time Rush from 2010 to 2013. She is also known for roles such as Natalie in the ABC series No Ordinary Family, and Mercedes in the ABC Family The Secret Life of the American Teenager. As a singer, she released her first full-length album Wonderful Crazy in 2005 under TC Music. Her second EP, Tired Eyes, was released on March 10, 2017. Her well-known songs include Planez, You Don’t Know, and Weekend Millionaires. Born Katelyn Marie Tarver on November 2, 1989, in Glennville, Georgia, to parents Kim and Kenny Tarver, her siblings are Amanda, Drew and Jake. She attended Palmwoods School in Los Angeles, USA. She began her music career as a contestant in the reality television program American Juniors, where she reached the top ten but failed to get a spot in the five-member band. She has been married to David Blaise since July 19, 2014. 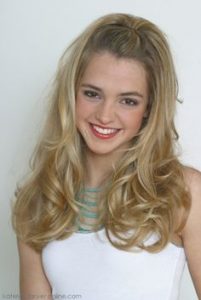 Katelyn Tarver Facts:
*She was born in Glennville, Georgia, on November 2, 1989.
*She was a cheerleader at her school.
*She cites Faith Hill as one of her favorite singers.
*She is best friends with Tiffany Thornton and Lucy Hale.
*Visit her official website: www.katelyntarver.com
*Follow her on Twitter, Facebook and Instagram.