Katharine McPhee is an American actress, singer, and songwriter who was the runner-up to Taylor Hicks on the fifth season of the television show American Idol in 2006. Her self-titled debut album, Katharine McPhee (2007), peaked at number two on the Billboard 200, and its first single, “Over It”, was a Pop Top 30 hit and was certified gold in 2008. Her second album, Unbroken (2010), debuted at No. 27 on the “Billboard 200”. The album featured the single “Had It All”, which peaked at number 22 on the AC chart. McPhee’s third album, the holiday-themed Christmas Is the Time to Say I Love You (2010), debuted at number 11 on the Billboard Top Holiday Albums chart, while the single “Have Yourself a Merry Little Christmas” peaked at number 16 on the “Billboard” AC chart. As an actress, McPhee co-starred in The House Bunny and Shark Night 3D, and played Karen Cartwright on Smash. From 2014 to 2018, she starred as Paige Dineen in CBS’ Scorpion. Born Katharine Hope McPhee on March 25, 1984 in Los Angeles, California, to parents Peisha and Daniel McPhee, her older sister, Adriana McPhee, is a vocal coach. McPhee attended the Boston Conservatory of Music for three semesters. She has been married to David Foster since June 28, 2019. She was previously married to Nick Cokas. 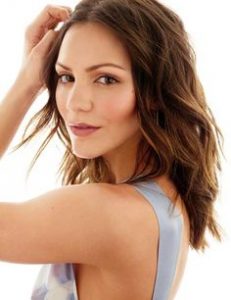 Katharine McPhee Facts:
*She was born on March 25, 1984 in Los Angeles, California, USA.
*She is of English, German, Irish, and Scottish descent.
*She attended Notre Dame High School in Sherman Oaks with Kirsten Dunst and Rachel Bilson.
*One of her personal American idols is Stevie Wonder.
*She has a Chihuahua named Nena.
*From 2014 to 2016, she dated actor Elyes Gabel.
*Visit her official website: www.katharinemcphee.net
*Follow her on Twitter, YouTube, Facebook and Instagram.