Kathryn Bernardo is a Filipino actress, model and recording artist, best known for her starring role in the hit TV series “Mara Clara.” Other notable television credits include ‘Princess and I’, ‘Got to Believe’, ‘Pangako Sa ‘Yo’ and ‘La Luna Sangre’. She has also starred in such films as Way Back Home, Can’t Help Falling in Love, Must Be…Love, 24/7 in Love, Crazy Beautiful You, She’s Dating the Gangster, Barcelona: A Love Untold and Sisterakas. Born Kathryn Chandria Manuel Bernardo on March 26, 1996 in Cabanatuan City, Nueva Ecija, Philippines, to Luzviminda and Teodore Bernardo, she has two older sisters named Kaye and Chrysler and one older brother named Kevin. She studied at the OB Montessori Center Inc. She began acting when she was 7, appearing as the young Cielo on ABS-CBN’s It Might Be You. She has been in a relationship with Daniel Padilla. 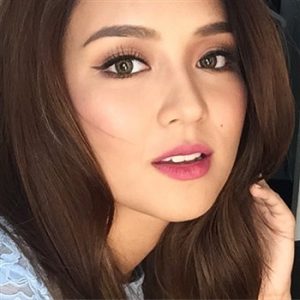 Kathryn Bernardo Facts:
*She is the youngest child in her family.
*She made her acting debut in 2003.
*In March 2013, she appeared in a photo shoot for Teen Vogue with actor Logan Lerman.
*She was previously in a relationship with Enrique Gil.
*Visit her official website: www.kathbernardo.com
*Follow her on Twitter, Facebook and Instagram.