Kevin Durant is an American professional basketball player who plays for the Brooklyn Nets of the National Basketball Association (NBA). He plays both the small forward and power forward positions. He played one season of college basketball for the University of Texas, and was selected as the second overall pick by the Seattle SuperSonics in the 2007 NBA draft. He played nine seasons with the franchise, which became the Oklahoma City Thunder in 2008, before signing with the Golden State Warriors in 2016. Durant won back-to-back NBA Championships in 2017 and 2018 with the Golden State Warriors and also took home NBA Finals MVP honors both years. 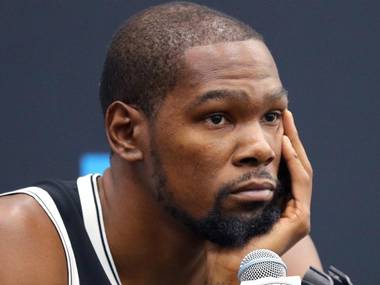 Kevin Durant Facts:
*Born Kevin Wayne Durant on September 29, 1988 in Washington, D.C., to parents Wanda and Wayne Pratt, he was raised by his grandmother, Barbara Davis.
*He has a sister named Brianna, and two brothers named Rayvonne and Tony.
*He was selected second overall in the 2007 NBA Draft by the Seattle SuperSonics.
*He became the youngest player in league history to win the NBA scoring title during the 2009-2010 season.
*He was named NBA MVP as a member of the Oklahoma City Thunder in 2014.
*He signed a free-agent deal with Golden State in July 2016.
*He signed with the Brooklyn Nets in 2019.
*In March 2020, Durant, including three other Nets’ players, tested positive for COVID-19.
*Visit his official website: www.kevindurant.com
*Follow him on Twitter, Facebook and Instagram.