Kiefer Sutherland is a Canadian actor, singer, director, and producer born in London, United Kingdom. Sutherland is best known for his portrayal of Jack Bauer in the Fox drama series 24, for which he won an Emmy Award, a Golden Globe Award, two Screen Actors Guild Awards, and two Satellite Awards. He has also starred in such films as The Bay Boy, Stand by Me, The Lost Boys, Young Guns, Flatliners, A Few Good Men, The Three Musketeers, A Time to Kill, Dark City, Phone Booth, Melancholia, Pompeii and Flatliners. He has also starred as Martin Bohm in the Fox drama Touch, and provided the facial motion capture and English voices for Big Boss and Venom Snake in the video games Metal Gear Solid V: Ground Zeroes and Metal Gear Solid V: The Phantom Pain. He played President Tom Kirkman in the political drama series Designated Survivor. In 2016, Sutherland released his single, Not Enough Whiskey, and his first album was titled Down in a Hole. 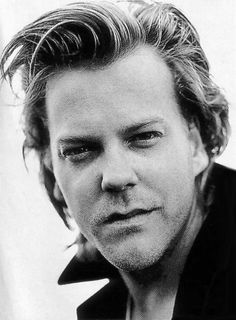 Born Kiefer William Frederick Dempsey George Rufus Sutherland on December 21, 1966 in St Mary’s Hospital, London, United Kingdom, to parents Shirley Douglas and Donald Sutherland, his maternal grandfather was Scottish-born Canadian politician and former Premier of Saskatchewan Tommy Douglas, who is widely credited for bringing universal health care to Canada. He was educated at Crescent Town Elementary School, St. Clair Junior High East York, and John G. Althouse Middle School in Toronto, Canada. He married Camelia Kath in 1987 and they had a daughter named Sarah in 1988. After his divorce from Kath, Sutherland was married to Elizabeth Kelly Winn from 1996 to 2004. In 2017, he became engaged to model/actress Cindy Vela.

Kiefer Sutherland Facts:
*Born on December 21, 1966 in St Mary’s Hospital, London, United Kingdom, he grew up in London, Corona, California and Toronto, Ontario.
*He is of Scottish, English, German, and Irish descent.
*He is named after Warren Kiefer, who was American-born director and writer.
*His parents got divorced in 1970.
*He played Counter Terrorist Unit (CTU) agent Jack Bauer in the Fox’s series 24 from 2001 to 2010.
*He received a star on the Hollywood Walk of Fame in December 2008.
*He had a crush on actress Julie Christie.
*He is a huge fan of the rock band Queen.
*Visit his official website: www.kiefersutherland.net
*Follow him on Twitter, YouTube, Facebook and Instagram.