Meera Mitun is an Indian actress and model, active primarily in Tamil cinema. Mitun was crowned Miss South India 2016 at the zonal rounds of the Miss Queen of India 2016 pageant. She has appeared in the films 8 Thottakkal, Thaanaa Serndha Koottam, and Bodhai Yeri Budhi Maari. She was also a contestant on eighth season of Star Vijay’s Jodi Number One show in early 2015, and took part in Star Vijay’s Bigg Boss Tamil programme in June 2019. 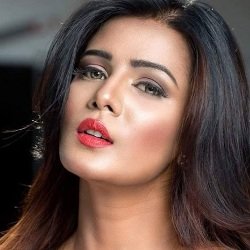 Born Thamizhselvi Mani on December 6, 1987 in Chennai, Tamil Nadu, India, to parents D. Mani, a civil engineer; and Shyamala, a homemaker, her brother, Thamizhamuthan, is an engineer. Mitun did her bachelors in microbiology from Ethiraj College for Women and her masters from SRM University, Coimbatore. She is divorced following a brief marriage which lasted for very few days.

Meera Mitun Facts:
*She was born on December 6, 1987 in Chennai, India.
*She briefly worked as a researcher at Dr Cherian’s Foundation.
*She began her career as a model.
*She made her film debut in 8 Thottakkal (2017).
*She garnered criticism from audiences for posting a topless picture to mark Tamil New Year in 2018.
*She is a supporter of Narendra Modi.
*She is known for her extensive controversies and allegations.
*Follow her on Twitter and Instagram.