Sade Adu is a British-Nigerian singer-songwriter, composer, arranger and record producer. She is best known as the lead singer of the English band Sade. She signed with Epic Records in 1980s, and recorded her first album, Diamond Life, in 1984. The album spawned four singles including the hits “Your Love Is King” and “Smooth Operator”. She won a Grammy Award for Best New Artist in 1986. Born Helen Folasade Adu on January 16, 1959, to Anne Hayes and Adebisi Adu, Sade was raised in London. She has an older brother named Banji. She is of Nigerian descent on her father’s side, and of English descent on her mother’s side. After graduating from Clacton County High School in Clacton-on-Sea, Essex, she studied Fashion design at Saint Martin’s School of Art in London. She was married to Carlos Scola Pliego from 1989 until 1995. She then began a relationship with Jamaican music producer Bob Morgan with whom she had a son, Mickalia “Ila” Adu, born in 1996. 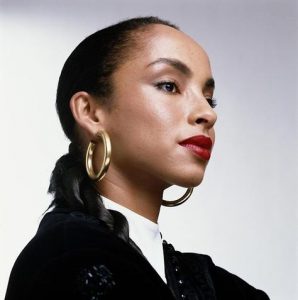 Sade Adu Facts:
*Her father was a Nigerian lecturer in economics of Yoruba, and her mother is an English, district nurse.
*She was raised in London by her English mother.
*She was listed at number 34 on VH1’s 100 Sexiest Artists.
*She was listed at number 66 on VH1’s Greatest Women of Rock N Roll.
*In 1985, her album “Diamond Life” won the British Phonographic Industry Award for British Album.
*Visit her official website: www.sade.com
*Follow her on Myspace.