Kimberly Caldwell is an American singer, actress and television presenter who placed seventh on the second season of American Idol. She worked as an entertainment correspondent and hosted various shows on the TV Guide Network. Caldwell released her debut single “Who Will You Run To” in 2006, and her debut single “Who Will You Run To” was released in 2006. Born Kimberly Ann Caldwell on February 25, 1982 in Katy, Texas, she has a younger sister named Kristy. She was a 5 time junior vocalist winner on Star Search (1983), and she also performed at the Grand Ole Opry. On December 31, 2014, Caldwell married American soccer player Jordan Harvey with whom she has two daughters. 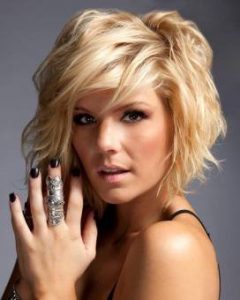 Kimberly Caldwell Facts:
*She was born on February 25, 1982 in Katy, Texas, USA.
*She gained recognition after her appearance on season two of American Idol.
*She sang at the 50th wedding anniversary of former President George H. W. Bush and Barbara Bush in 1995.
*Her debut single “Who Will You Run To” was released in 2006.
*She worked as a correspondent for Fox Sport’s 54321.
*She has a large collection of bucket hats and likes black & white clothes.
*She is good friends with David Cook.
*Visit her official website: www.kimberly-caldwell.com
*Follow her on Twitter, YouTube, Facebook and Instagram.