Tanner Fox is an American YouTuber who rose to fame as a competitive stunt scooter rider during the 2010s, eventually turning pro. He is best known for his videos on his YouTube channel ‘MTflims’, where he has more than 9.8 million subscribers and growing. He has more than 4.3 million followers on Instagram and over 584k followers on Twitter. Fox’s content includes vlogs, travel, and local adventures around southern California with his friends. Also a businessman, Fox designs clothing, accessories, and gifts marketed through his online webshop. Born on December 22, 1999 in San Diego, California, he has one older sister named Lindsay. Fox was only 11 when he started scooter riding. In 2019, he began dating Avalon Nadfalusi. He previously dated social media sensation Taylor Alesia. 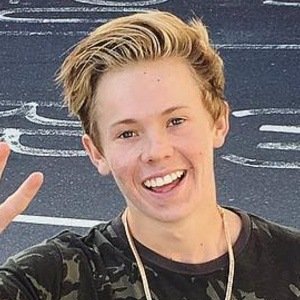 Tanner Fox Facts:
*He was born on December 22, 1999 in San Diego, California, USA.
*His parents divorced when he was ten years old.
*He created his YouTube channel under the name MTFilms in September 2011.
*At age 16, he bought a Nissan GT-R with his own money and frequently attends automotive events.
*He owns a brand of clothing and accessories called TFox.
*He had a dog named Kirby Fox who died in July 2018.
*Visit his official website: www.tfoxbrand.com
*Follow him on Twitter, YouTube, Facebook and Instagram.