Kirk Cameron is an American actor. He is best known for his portrayal of Mike Seaver on the ABC sitcom Growing Pains, for which he was nominated for two Golden Globe Awards. Cameron portrayed Cameron “Buck” Williams in the Left Behind film series and Caleb Holt in the drama film Fireproof. His 2014 film, Saving Christmas, was panned by critics and peaked the IMDb Bottom 100 List within one month of its theatrical release. 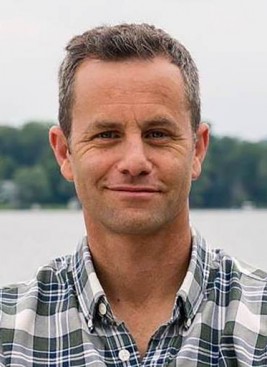 Born Kirk Thomas Cameron on October 12, 1970 in Panorama City, Los Angeles, California, to parents Barbara and Robert Cameron, he is of Scottish, English, German, Irish, Channel Islander (Jersey), and Dutch descent. He has three sisters: Melissa, Bridgette, and actress Candace Cameron Bure. Cameron began acting at the age of nine, appearing in television commercials and guest roles. His first starring role was at the age of thirteen in the series Two Marriages (1983). On July 21, 1991, Cameron married fellow Growing Pains star Chelsea Noble. They now have six children, four of whom were adopted: Jack, Isabella, Anna, and Luke; and two biological: Olivia Rose and James Thomas.

Kirk Cameron Facts:
*He was born on October 12, 1970 in Panorama City, Los Angeles, California, USA.
*He is the brother of actress Candace Cameron Bure, Bridgette Cameron and Melissa Cameron.
*He began acting at the age of nine, and his first job was for a breakfast cereal.
*He was ranked #15 in VH1’s list of the “100 Greatest Kid Stars”
*He was nominated for two Golden Globe Awards for his role as Mike Seaver on the ABC sitcom Growing Pains.
*His acting mentor, and one of his best friends, was Growing Pains co-star Alan Thicke.
*He is also is also an active Evangelical Christian, and works with Ray Comfort on The Way of the Master and has co-founded The Firefly Foundation with his wife, actress Chelsea Noble.
*Visit his official website: www.kirkcameron.com
*Follow him on Twitter, Facebook and Instagram.